As part of its inauguration Friday, June 20, 2008, the VIADUC association visited the prefect Agou Mr. NOUNYAVA Kokou Paul on Monday, June 16, 2008 at 9am. During the discussions VIADUC presented to the prefect members of the VIADUC.

At the exit of the hearing, the members of the VIADUC office took a family photo with the prefect.

The next day, Tuesday, June 17, VIADUC organized with its department FACA (Fraternity Friendship Club Agou) an operation called “clean operation prefecture. It was a perfect success.

On Thursday, June 19, 2008, as a prelude to the inaugural evening, VIADUC organized, with its children who make up the FACA cultural club, a torchlight retreat from 6.30 pm to 9 pm. It is in a sublime atmosphere that procession roamed all the arteries of the city of Agou by inviting all the population to Joy CITY (the Hotel of the place) on Friday, June 20, 2008 for the inaugural evening which was scheduled for 19h 30 had to start at 22h.

After the installation of the considerable public composed of all the social layers and that of the guests – among others the president of the Traditional chiefs of Togo Togbe PEBI and the personal head of the Civil status of the prefecture of Agou, Mr ADZAFO Yawo; the inauguration of VIADUC began with the words of welcome from the Vice President of VIADUC, the director of CEG Agou-gare; Mr AKOBI Salami Vice President of VIADUC.

The history of VIADUC was the responsibility of Mr Victor EKLU, president of the association AMECA Togo. 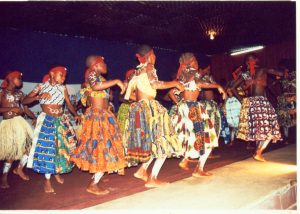 The evening, rich in color, was marked by the anthem of VIADUC, traditional dances performed by the ballet club maintained by Mrs. HEDZAKPO Viviane; the declaration of poems, the theater, the interpretation of the songs of confirmed artists; question-answer game with prizes and choreographic dances.

Note that there was the actual presence of an agent of the ATOP (Togolese News Agency) and that before the end of the evening, the head canton Nyogbo did not fail to say words of encouragement at the VIADUC / FACA and the public.

The evening ended at 2:30 without incident.